A healthy menstrual cycle is an important aspect in women’s physiology as it reflects the proper functioning of the reproductive organs. There are 4 phases in the menstrual cycle. Each phase relates to a dynamic change within the female body.

With each phase different hormones are triggered and this causes the body to respond in different ways. Modern physiologists describe the menstrual cycle in terms of hormones made by the ovaries (estrogen & progesterone) and their actions on the follicles, the tubes, the endometrium (lining) and the uterus. In Chinese Medicine we talk about the involvement of Qi & Blood with the influence of Yin/Yang.

The average menstrual cycle is 28 but can range from 24-35 days. 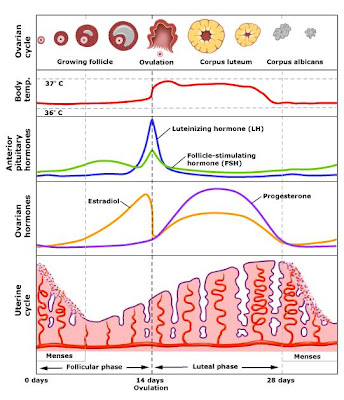 Day 1 is the considered the first day of the 28 day cycle. If an egg has not been fertilized itdisintegrates. Low levels of both estrogen & progesterone during this phase cause theendometrium (lining of the uterus) to break down and shed in the form of menstrual blood. Bleeding last an average of 5 days.

Note: if your period begins in the evening ie 5pm or during the night 3am then Day 1 is taken from the next day.

The nature of the menstrual flow and its accompanying symptoms are all significant in pinpointing any glitches in the movement of qi and blood. Any obstructions to the menstrual flow can have implications for infertility. The timely arrival and departure of the period is therefore crucial to the transition, growth and decline between yin & yang and the interplay of qi and blood.

Early in the menstrual cycle the pituitary gland in the brain produces rising amounts of follicle stimulating hormone (FSH) which acts on the ovaries to promote the development of several follicles, each one containing an egg. Only one follicle will reach maturity. Toward the end of this phase, the ovaries secrete increasing levels of estrogen which causes the uterine lining to begin thickening in preparation for a potential fertilized egg.

The pituitary gland and hypothalamus release a surge of lutenizing hormone (LH) about midway through the cycle. This causes the mature follicle to bulge out from the surface of the ovary and burst, releasing the egg. Ovulation usually occurs around day 14 of the cycle. The egg then begins to travel down the fallopian tube into the uterus. This is the time woman are most likely to fall pregnant.

After releasing the egg, the ruptured follicle develops into a structure called the corpusluteum (an endocrine body), which secretes increasing amounts of progesterone. The corpus luteum is the only structure which produces the hormone progesterone in large quantities. The progesterone causes the endometrium to thicken further and prepare to support embryonic development. If the egg is fertilized, the corpus luteum begins to produce chrionic gonadotropin (HCG) pregnancy hormone which maintains the corpusluteum and its progesterone secretion. The egg moves to the uterus and attaches itself to the endometrium about six or seven days after ovulation, where it begins to develop into a fetus.

If the egg is not fertilized, the corpus luteum degenerates after about 14 days and levels of progesterone and estrogen drop. This causes the endometrium to break down and shed, and a new menstrual cycle begins.